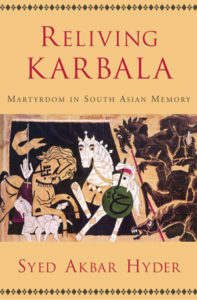 The story of the great tragedy of Karbala is the centerpoint of the mourning and devotional practices of the Islamic months of Muharram and Safar for Shia Muslims across the globe. The story is recounted of Imam Husain and his companions who valiantly defended Islam to the point of death from the army of the oppressive ruler Yazid. As this book shows, this tragedy is also a point of inspiration for many mystically minded Muslims in the wider Islamic Ummah and has played a part in reformist discourses among both Muslims and non-Muslims.

A portion of the book is devoted to examining the institution of Shia commemoration with its devotional sorrow and beautiful poetry and literature. It also considers the importance of recounting this story in the reinforcement of the Shia identity, how it has traveled beyond the geography of South Asia, and its role in discussions of gender dynamics.

A second part of the book looks at how the story of Karbala is seen through a less sorrowful lens, where the Martyrdom of Imam Husain is celebrated by the Sufis as a symbol of the death of the ego and the resurrection in eternity.

In a third section, the martyrs of Karbala have been the heroes of socioreligious reform who have been invoked by Sunni Muslims such as Muhammad Iqbal and have appeared in Urdu progressive literature. They have even played a role in the discourses of non-Muslim reformist writers like Munshi Premchand and Mahatma Gandhi.

This book draws from a variety of sources to show how the story of Karbala has featured in the lives of the people of South Asia and how the people of South Asia have “relived” Karbala in different ways. The range of people who have benefited from this symbol is remarkable indeed and is a testimony that no one group can claim this narrative exclusively for itself.

This book is part of the MARC library collection.